This year was my first year at Craft Beer Rising, which is held at the legendary Old Truman Brewery.  I went along to 1. support KingBeer and 2. let people know what I do. It was also lovely meeting those involved in bringing us some of the finest craft beers in the UK.

Good atmosphere and some cracking craft beer. Here are my highlights from the day…

KingBeer – More to come on these guys soon! Safe to say they were a great addition to the festival.

Brains Craft Brewery – I love their designs.  I tried Rye Catcher and it was handsome!  Bravo guys.

Fordham – These American beers are lovely and have recently benefited heavily from some cracking new bottle label designs. They looked great and Ram’s Head on cask tasted bloomin’ lovely!

Harbour Brewing – Other than KingBeer (obviously), Harbour’s Double IPA no.6 was my favourite of the day.  At 9.3% it knocks your head off but you can’t help but drink more – it’s just so tasty. It should come with a warning…THIS BEER REQUIRES AN EMPTY DIARY. The mango and chili was odd but the flavours were clear and strangely enjoyable. Harbour were 1 of many breweries proudly flying the Kernow flag.  Although they weren’t exhibiting, it was great to see the guys from Rebel Brewing there too. 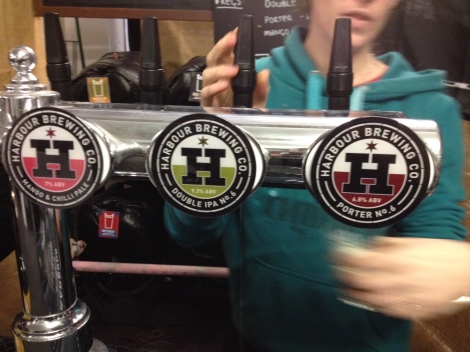 Brew Dog – Good to see the Brew Dog crew there. The tribute to Putin made me chuckle and as per – the beer tasted great. Their freebies were quite cool too – with transfer tattoos being handed out.

Lagunitas – These guys produce one of my favourite beers so I was thrilled to see them at the Craft Beer Rising. All the way from California, their presence here is growing and hopefully it will start to become more readily available. One thing is for certain – they will not sacrifice the quality of the beer to get to that stage. If you haven’t tried their beer – get involved!

Crafty Dan – I visited the Crafty Dan bar as well – which was a very good idea…great beers and the best reason to shop at Sainsbury’s!  I was introduced to Fallen Nun and what a lovely lady she is! Good job guys. The craft arm of the Thwaites Brewery will without doubt go from strength to strength.

Thornbridge Brewery – The best reason to shop in Waitrose! The lovely people at Thornbridge brewery were kind enough to have a chat about their beers and Chiron was my favourite…so moreish and fruity – extremely enjoyable. I could have quaffed that all day!

Meantime Brewing – These guys ooze class and their branding is beautiful – just like their beer. I particularly liked a beer list in the form of a swatch booklet!

Renaissance Brewing Company – My most exciting new find of the entire festival!  Multi award winning New Zealand beer from the Marlborough wine region.  With fantastic design that mirrors their origins – these well balanced beers really stood out. You’ll be seeing more of them I’m sure. I couldn’t choose a favourite of theirs…they’re just different but all are great! Download their app!

One of the splendid chaps from the Drafthouse (one of the best craft beer bars in London) kindly pointed out Old Engine Oil Porter and it was beautiful!

The American Craft Beer Co – These guys introduced me to Point Brewery and I have to say although the labels kind of freak me out a little – the beer is lovely. 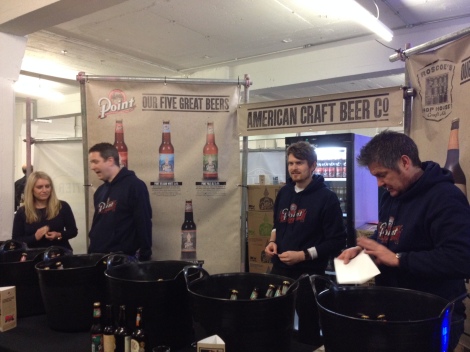 Late Knights – Other than KingBeer (obviously) these guys had the coolest beer labels. Very quirky, very unique and very memorable. They should be entered for a packaging design award. I love it.  I also love the Polish IPA.  I took a bottle of Worm Catcher home and it was nice but not a patch on the PIPA, which is made by a Polish brewer and with Polish hops.  Get drinking this one when you can!

So all in all a very fine day that I recommend to any beer lover.  There were many other beers at Craft Beer Rising and some great breweries but the above are just my personal preferences and the ones I had more time to get to know.  No doubt I missed some belters – but you can’t drink them all!

If you need designs for your brewery or have any questions please do get in touch. If I don’t see you before – I’ll see you at Craft Beer Rising 2015!